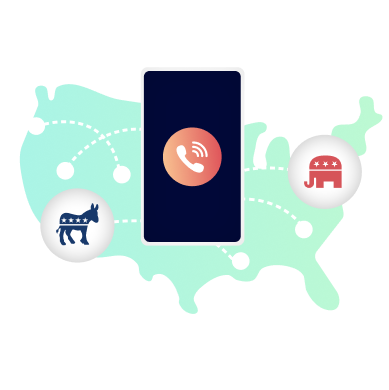 How to Stop Political Robocalls and Political Texts

Americans received billions of political calls and texts in 2020. Here are some ways to take back control over the messages you receive. If you lived in a swing state, you were probably seeing at least five political texts per day in your message inbox.

We know how frustrating it can be to get political robocalls and texts on top of the torrent of unwanted text messages and spam calls you already receive daily.

Here, we’ll take a deep dive into why politicians are allowed to send us political texts and robocalls and how to stop these messages from reaching you - so you can restore a little peace and quiet.

What are political robocalls and political text messages?

Political campaigns have been using robocalls and text messages since the early 2000s to promote their party messaging and broadcast information. These methods have become popular because they have higher engagement rates and are more effective than traditional ads.

How effective? One study of peer-to-peer political text messages in 2020 showed that people who received texts were 0.7% more likely to vote than their untexted counterparts in the same districts; though a small percentage, this effect can make a big difference in competitive races.

Although some political messages can be helpful and desirable to those receiving them, not all Americans want to receive political text messages or political robocalls.

In fact, if you’re anything like us, you would probably rather throw your phone into the ocean than receive one more unwanted text message or robocall, no matter what it’s about.

But political messages are regulated differently than the average robocall or spam text, so there’s a little more involved to stopping them from reaching you (more on that later). Your best bet remains downloading a third-party robocall and spam text blocker like Robokiller.

Get good calls only with Robokiller

Try Robokiller for free for 7 days

The answer might surprise you, but yes, political robocalls and political text messages are usually legal.

Because of limits to the FTC’s authority, the National Do Not Call Registry list requirements do not apply to political calls or texts. However, political campaigns do have to follow specific rules in the Telephone Consumer Protection Act (TCPA).

Here are a few of the rules that political campaigns have to follow when contacting you:


For more information, check out the FCC guidelines.

There are a few different ways political messages get to our phones, which also adds to the increased difficulty in regulating them.

Campaign teams use autodialers to reach their contact lists.

Autodialers can include live calls or prerecorded voice messages. For example, you may have received a message recorded by Donald Trump or Joe Biden during the 2020 election asking for your vote, or a call from a live person asking if they could chat about your voting plans.

If you get a text from a five- or six-digit number, that’s a short code. These abbreviated phone numbers are commonly used to send messages with discounts, passwords, and political campaign information.

They’re more popular now that the U.S. Federal Election Commission granted limited approval to collect political contributions through them. They’ll likely continue because they have a higher open rate than emails.

If you get a text message that starts with something like “This is so-and-so from Team Biden,” that’s probably a peer-to-peer message. These messages are sent by real people — usually campaign volunteers.

Because P2P texting doesn’t use an autodialer, the FCC declared in June 2020 that P2P texting is not considered an automatic telephone dialing system under the TCPA and therefore doesn’t require prior consent.

Political groups use peer-to-peer texting to get around the “prior consent” requirements of the TCPA. That’s a problem, because these messages can still be unwanted and annoying, and it can be extremely difficult to opt out. P2P texting is a big reason why Americans are receiving more and more political text messages with every election cycle.

Mobile carriers have tried to block some P2P political texts, but their actions have received criticism from across the political spectrum. In 2020, the Trump campaign accused major mobile carriers of partisanship after they blocked a massive P2P texting campaign. And in 2021, liberal groups complained that proposed changes to AT&T and T-Mobile’s spam-blocking policies would impact their ability to organize by making it more difficult and expensive to send P2P messages.

Until the law changes, chances are P2P texting without prior consent is here to stay. That leaves it up to the individual to take blocking political spam into their own hands.

Why am I getting political texts and robocalls?

When you register to vote, information about your political affiliation, the area you live, and even past political donations becomes accessible to campaign groups.

Political campaigns may also have gotten a hold of your phone number from:


How to identify political phone scams

Not all political robocalls and texts are playing fair. Sometimes, the senders are intentionally misleading or scamming you.

For example, in the leadup to Election Day 2020, many voters across the U.S. received robocalls and spam texts telling them to “stay safe and stay home.” Voters in Michigan received spam robocalls that said they should vote the day following Election Day to avoid long lines.

These messages created confusion and demonstrated the many vulnerabilities in the U.S. political messaging system, prompting investigations by the Department of Homeland Security and the FBI.

Here are a few tried-and-true ways to spot a phone scam:


Bottom line: If you’re confused or scared by the message, it’s likely spam, or a scammer trying to defraud you. In the case of political elections, it’s likely meant to dissuade you from voting, and/or confuse you about the process.

Read more: Political Phone Scams: What You Need To Know Before Making A Campaign Donation

How to stop political texts and political robocalls

Because they’re regulated differently and most are legal, it’s more difficult to put an end to political spam than your usual robocalls or spam texts.

P2P messaging makes it especially hard to block the political text messages you receive, since each comes from a new, individual phone number.

The most effective solution is to use a third-party robocall blocker like Robokiller. Recommended by the FTC, robocall blockers use call data or reports from users, the FTC, and other sources to predict which calls are illegal or likely scams, then intercept those calls before they ever reach you.

Because political messages are largely legal, Robokiller blocks them differently than other kinds of spam calls and unwanted text messages. You must specify to Robokiller’s algorithm that you consider these kinds of calls and texts to be spam. Or, if a sender or message gets enough spam complaints, it could get universally blocked — a bit of democracy in action!

Aside from using a third-party robocall blocker, you have a few other options to consider:

Legally, a political organization or campaign must comply with written or verbal requests to stop receiving messages. Most legitimate political messages will have an option to unsubscribe.

For texts, you can usually opt out simply by responding STOP to texts. For calls, you can tell the caller to take you off their list.

If you continue receiving unwanted text messages or calls after requesting to unsubscribe, you can contact the campaign or organization directly via email or snail mail and request to be removed.

While this may not stop the campaign entirely from contacting you, you can block each individual number that sends messages.

Read more: Tips for blocking numbers on iPhones and Androids.

Not all political calls and texts are bad, right?

In theory, no! Not all political text messages and political robocalls are bad, nor are they illegal. But they can still be really annoying, and some may even be scams that could lead to identity theft or fraud.

At Robokiller, we believe there are some real problems with the way political messaging is handled in the U.S, like:


Why is Robokiller the best robocall blocker to stop political messages?

Robokiller is 99% effective at preventing spam calls and texts before they ever reach you, and we empower users to take control into their own hands.

We support you with the tools you need to secure your private information and get good calls only™. We believe in educating everyone on how to stop political texts and calls.

You get to specify if you want political calls or not, and we’ll act accordingly. You shouldn’t have to unsubscribe from every single political message — we’ll block them for you instead.

Everyone deserves some Zen; join us in the fight against spammers so everyone can live life spam-call-free™.